Why Remote Accounting Work is a Dream Come True

Why Remote Accounting Work is a Dream Come True What is a polar vortex, you ask? First, it’s pretty much what I’m in the dead center of as I write this:

Second – and I guess this probably should have been listed first, but whatever – a polar vortex, as defined by wunderground, is “one of several semi-permanent weather systems over the Earth, the polar vortex is an area of low pressure in the upper atmosphere that, on average in the Northern Hemisphere, typically has centers in two main areas: near Canada’s Baffin Island, and over northeast Siberia.”

Basically, from the picture, and what I can glean from using The Googler, is that it’s sort of an arctic cyclone hovering in the far north, just waiting for all of the planets to align and the jet stream to wander a bit too far north, then it can pounce like a cat on the Midwest and Great Lakes region.

A polar vortex is like an angry cat that’s been shaved to look as ridiculous as mine does here.

So, just in case you haven’t heard, via Facebook or the news, we got A LOT of snow over the weekend and it’s REALLY cold around here.

Having all of this weather action means a few things, but they all add up to this: When we get 2 feet of snow and the high temps are expected to barely be above 0, no one is going anywhere. The kids aren’t going to school and a lot of people aren’t going to work.

A few years ago, this would have been a problem, because most of my clients were local, small businesses and I would go to their offices once a week. I would have had to cancel appointments or find a babysitter, and risk treacherous roads and dangerous temperatures to get to the appointments I couldn’t cancel. It would have thrown my entire schedule for the week in utter disarray, and odds were that I would have had to work later in the evening or push my Mon-Fri schedule into the weekend.

These days? Not so much!

Since I made the decision to work almost exclusively remotely (I still have two clients visit on-site regularly), my work schedule is a bit more fluid. I had planned to visit one of my two on-site clients today, but when school was called off yesterday, I just texted him and said: “Hey, I’ll be there later in the week, depends on if there’s school or not Tuesday, I’ll keep you posted.

That took care of rescheduling all of my set appointments, so all I had to was rearrange the rest of the week, which amounted to dragging around a couple of appointments on my calendar: 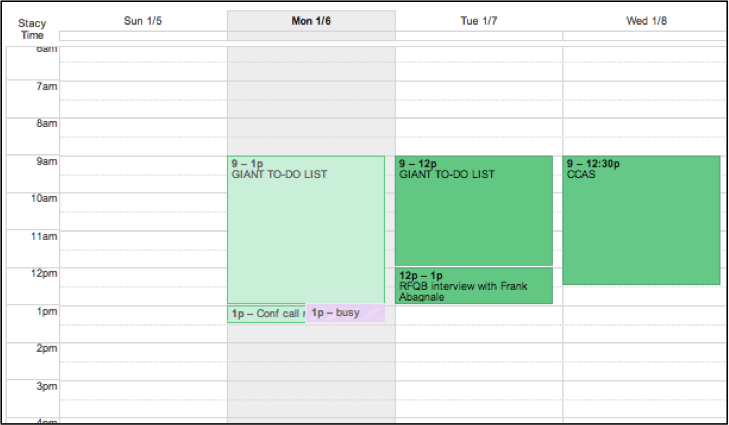 I DO work in Stacy Time, and this is actually my calendar

That was it. All the other client stuff I had to do? The data cleanup and bank reconciliations? Those were done in QuickBooks Online. The payroll processing, and the month end/quarterly filings? That was all in Intuit® Online Payroll.

Oh yeah. Kids! I still had kids at home! Well, I did the responsible thing: I let my kids run around like banshees. Nick Jr., the Cartoon Network and any number of other gadgets – my iPad, their iPhones, the Nintendo DS or the LeapPad GS … whatever it was that kept them busy – was their babysitter. Then, I locked myself in my bedroom and I got an amazing amount of work done today without any of my non-vortex stricken clients knowing anything was amiss. 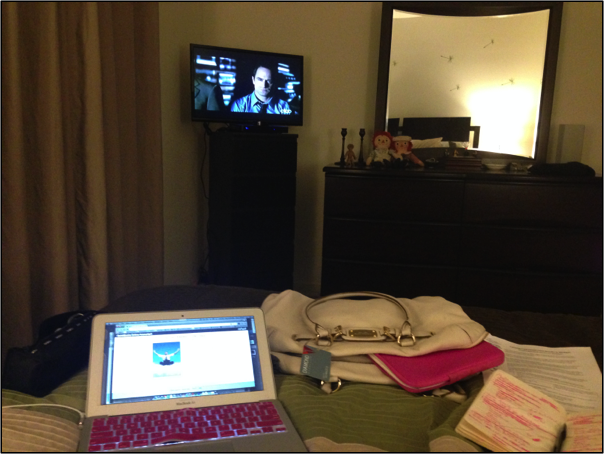 That’s Law & Order on the TV. Elliott & Olivia are my friends. DON’T JUDGE.

So there it is. For future reference, should you also happen to get trapped in the dreaded Polar Vortex, QuickBooks Online is the answer to all of your questions. Except, maybe, the question whether Elliott Stabler ever return to Law & Order SVU?